Last night, as we huddled around our jetboils in our puffy jackets in the bitter cold, we all said what our greatest fears were. I don’t know who’s idea this was, Agame probably. My fear was simple: death. Other’s  fears were not so obvious. The most glaring example was Fluffy. His greatest fear was that he was actually mentally handicapped, and no one told him. Fluffy is an architect. This was such an odd fear to me, I couldn’t help asking follow up questions. How would you account for the vast conspiracy that would have to exist in order for this to be true? Do you really believe that your family, friends, teachers, employers, strangers, all were fooling you for every second of your life? It would take a Truman Show like effort to conceal it from you. Your entire world would have to be carefully manipulated every second of your life. Would clients and coworkers take his crude boxes with pyramids on top drawing and pretend to submit them as plans for homes and government buildings? Lastly, why would it matter? Your life as you understand it is going just fine. This was truly paranoid thinking. The sort of tinfoil hat mania that could only grip a man with severe trust issues. It was fascinating.

As we hiked our way up and down some truly gorgeous mountains, the thought stuck in our brains. What if we were all mentally handicapped? someone suggested. What if this whole hike is just some kind of exploitive TV show and we are all being duped for a television audience? Looking at our experiences through this lens, our pasts only reinforced the theory. There was the time AGame claimed a man we passed in his tent asleep at 10am had to be fine because she saw him the day before and he seemed okay. There was the fact that I could , consistently, never name a town I had been in correctly. There was the time I was convinced that a light rail station was Century link field. Once the seed of Fluffy’s paranoia was planted it was hard to shake. I would find myself imagining the cold open for the series:

Six people from all over America from different towns and different backgrounds who all share one thing in common: they are all mentally retarded and are completely unaware of it. Let’s see what happens when this ragtag group of developmentally delayed hikers attempt the impossible: to walk from Mexico to Canada along the backbone of the Cascade and Sierra Mountains. On there own. Without assistance or guidance. This is their journey. This ……is Ups and Downs.

On our way up one of the day’s many hills, I had to stop to heed nature’s call (i.e shit in a hole). I caught up with Sarah a half an hour later. The trail had become covered in huckleberries and blueberries and she was stopped near a side hill chewing away. Her mouth and hands were stained blue. Sarah loves wild berries and foraging tends to slow her down a little. She has even created her own vernacular for berry picking. “Look” she said as I got nearer “Huckleberry Bear”. She motioned down the embankment. There was a smallish black bear at the bottom of the hill. “He likes Huckles too.”She said through a mouthfull of berries. “Oooh” she crowed “this one’s a plumper!” She carefully plucked a particularly large and dark blueberry and popped it in her mouth.

After we left Huckleberry Bear to his Plumpers, we climbed a few more ridges and crossed some alpine meadows filled with Marmots. They would run from me down the trail thirty feet or so then jump into a burrow or a rock after I passed their hiding spot by a few meters, I would turn around to see their face poking around the rock or out of the whole eyeing me. Toward evening we climbed the last of the ascents for the day as dusk was arriving. These are probably my favorite moments on the trail, though it is hard to articulate why. There is something amazing about the quiet exhausted moments on top of a ridge near nightfall. I watch my elongated shadow cast out in front of me, the only sounds are the wind and my footsteps and I seem entirely alone in the world. The mountains in front of me are lit up by the setting sun and look artificial. Shortly we arrived at another stunning, reflective mountain lake where we would camp for the evening. 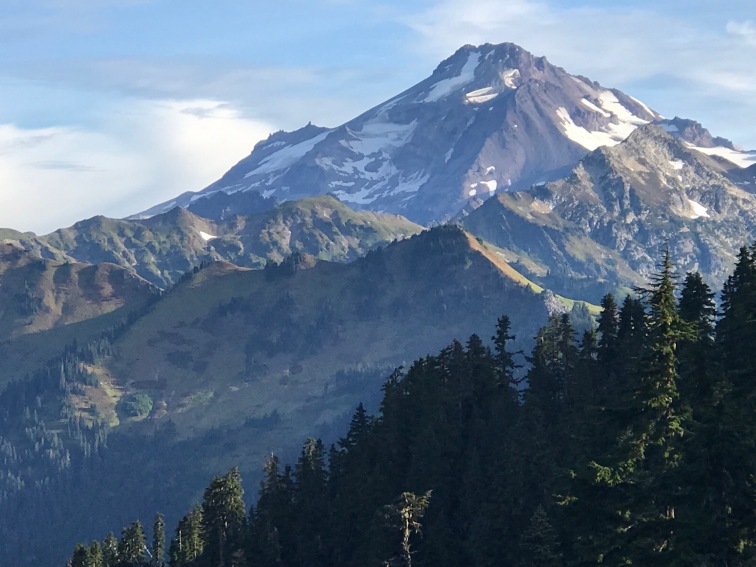 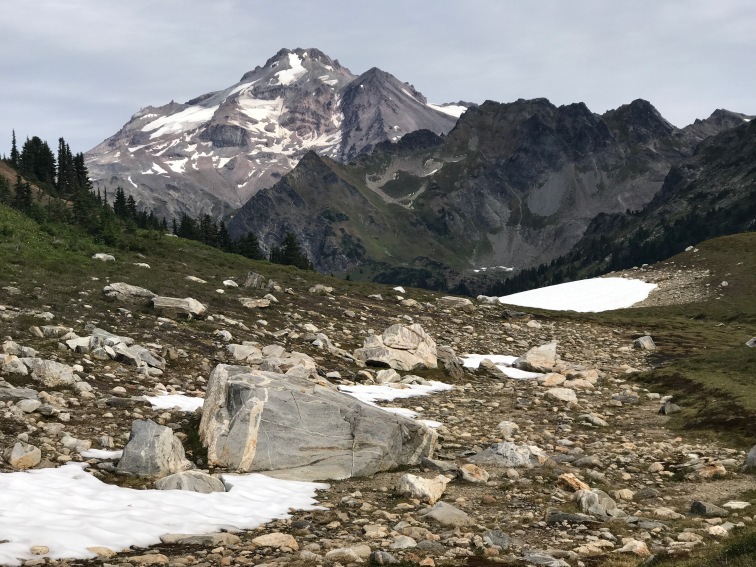 7 thoughts on “Ups and Downs”